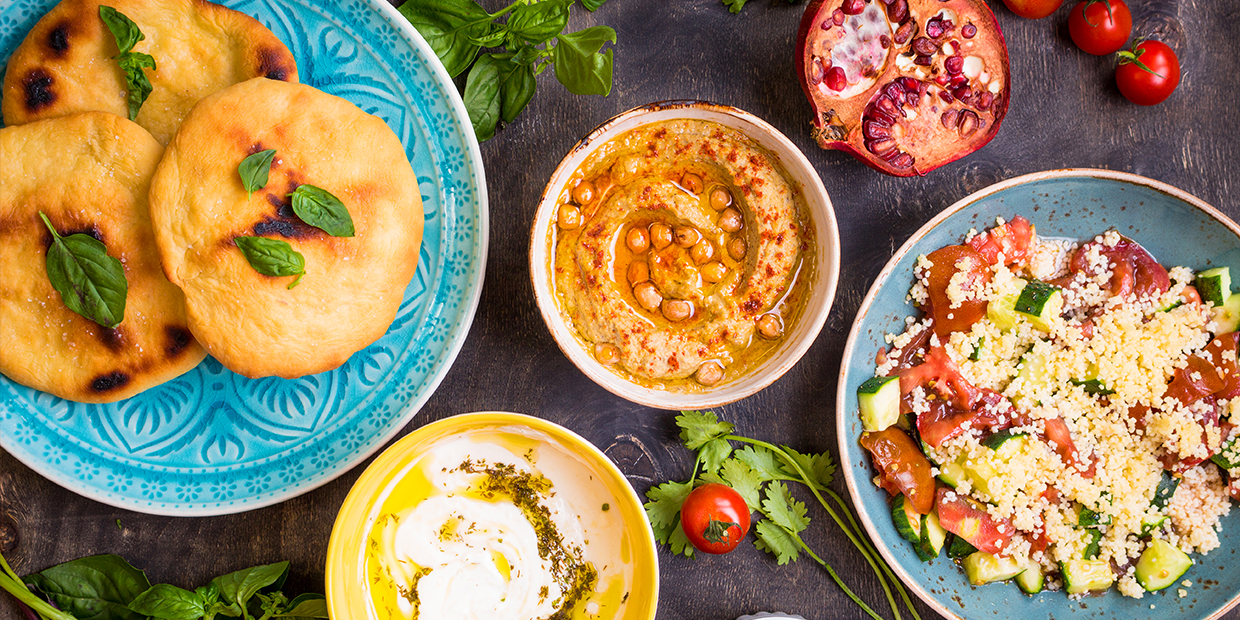 The Great Middle East And Its Popular Cuisines!

When we talk about the Middle East, we instantly think of oasis, souks and bazaars, the renowned culture, architecture and historical remnants. But one thing that is most resonated with – their food and food culture! The Middle Eastern Cuisine.

Middle Eastern food is one of the most famous ethnic cuisines and has won the hearts of people across the world. It has its origin from different regions under the Middle East, such as Lebanon, Turkey, Persia, Egypt, Syria, Morocco, Iran, and Israel, to name a few.

The culinary traditions that come from these regions more or less remain the same. However, the variations in the food are largely influenced by the culture in different Middle Eastern countries, and the trade routes that have been used for many centuries.

In this blog, we will cover some of the most popular cuisines that come under Middle Eastern food.

Lebanese cuisine has its culinary practices and traditions originating from Lebanon. Once you taste Lebanese food, you will surely ask for more. Delicious and fresh with various types of exotic spices, Lebanese cuisine is one of the most loved in the world.

Ingredients like olive oil, parsley, garlic, dried lemons, and mint are common to this cuisine. The cuisine also includes an abundance of fruits, vegetables, and whole grains. Lean meats like chicken, fresh fish, and mutton are preferred, making it an ideal cuisine for anyone following a healthy diet.

Some renowned dishes include Falafels (deep-fried patties made from ground chickpeas), Moutabel (a dip made of char-grilled eggplant), Fava Beans, Fattoush (a salad that contains freshly chopped greens, vegetables, zesty lime vinaigrette dressing topped with homemade pita crisps). Another famous Lebanese dish that is available as street food in major cities of the world is Shawarma.

Coming to desserts, in Lebanon, certain types of desserts are specifically prepared on special occasions. For instance, Meghli (a rice pudding dessert spiced with caraway, cinnamon, and anise) is prepared to celebrate the birth of a newborn baby in the family. 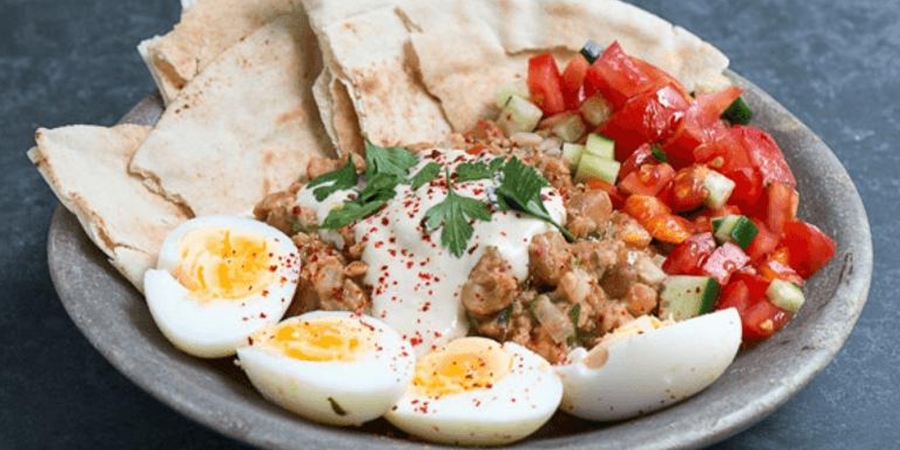 Egyptian cuisine is extremely vast and unique. The legacy of this ancient civilization had a profound influence on its culinary landscape and shares many similarities with the food from Eastern Mediterranean regions. Historically, this cuisine made heavy use of vegetables, fruits, and legumes from Egypt rich Nile Valley.

Ful Medames (Stew of cooked fava beans made with spices, onions, garlic, and lemon juice) is a popular dish and is Egypt’s answer to hummus. This dish is often prepared for breakfast and is popular street food in Egypt.

A dish that initially originated in Yemen and found its way to Egypt is Shakshuka (Creamy scrambled eggs cooked with pepper, onions, tomatoes, and spice blend). Kofta and Kebabs are other famous street food delicacies that are common in Egyptian cuisine. 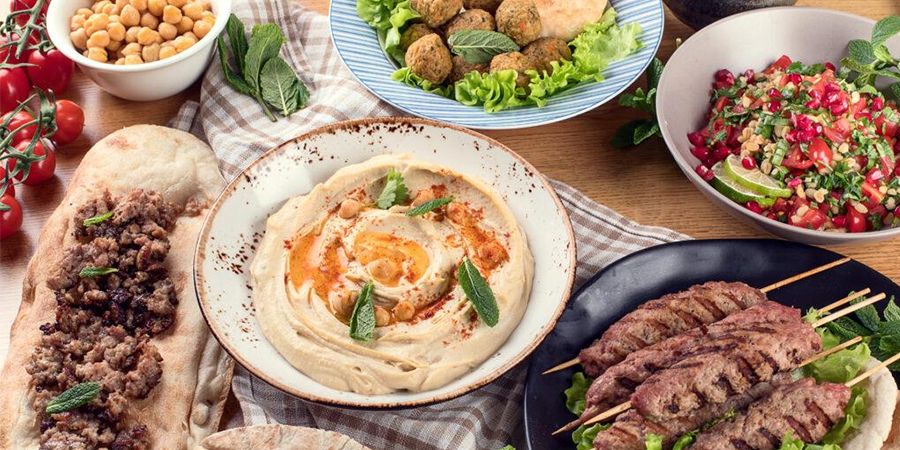 Arab cuisine is accentuated by Indian and Mediterranean cuisine. Indian spices make the dishes flavorful along with Middle Eastern herbs and ingredients like thyme, saffron, garlic, and yogurt. If you were ever invited for a meal at an Arab family’s home, you would be moved by their hospitality. The Arab platter commonly includes stewed vegetables, fruits like pomegranate, dry fruits, rice, lamb, and chicken.

In Arab cuisine, red meat is often used in many dishes. For instance, Kibbeh (crispy patties made from bulgur wheat, chopped mint, and onions stirred into ground lamb) is a staple and appetizing Arab dish. 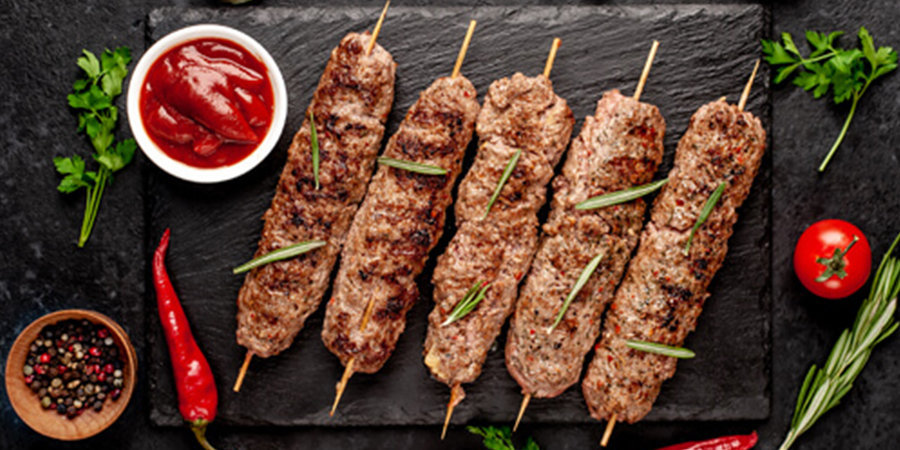 Turkish delicacies have been an integral part of restaurant menus all over the world. Turkish cuisine has its roots in Ottoman cuisine and is infamous for meat skewers, but there is more to the cuisine. Whether it’s appetizers, main course, or desserts, Turkish food will definitely surprise your taste buds.

Some of the most used ingredients in Turkish dishes are black pepper, sumac, thyme, mint, cinnamon, and bay leaves.

A well-known Turkish dessert is Baklava (A layered pastry dessert made of filo pastry, filled with chopped nuts, and sweetened with syrup or honey).

Baklava is prepared in Lebanon and Syria as well. Compared to the Baklava from these regions, Turkish Baklavas are made of pistachio or walnuts. It has crisp and thin layers and tastes a bit sweeter than Syrian Baklava. Lebanese Baklava, on the other hand, is prepared with walnuts and orange blossom water. They are also lighter in terms of the flakiness of the pastry and overall weight. 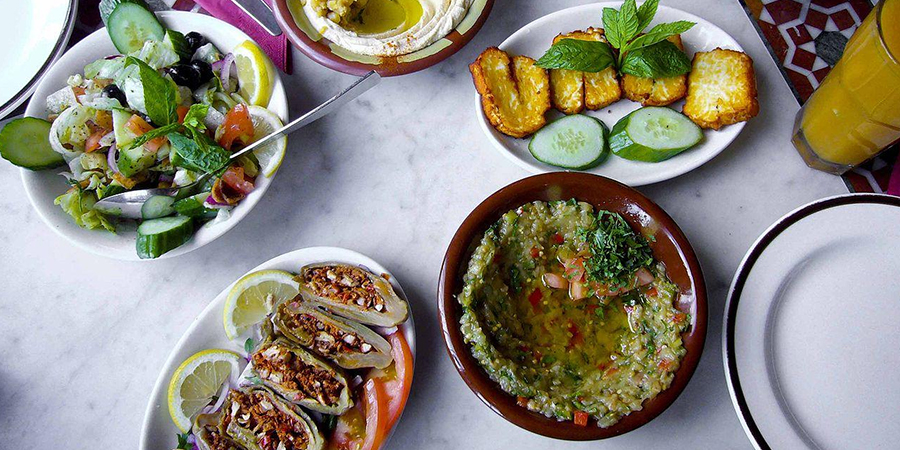 In Syrian cuisine, the popular ingredients used are rice, zucchini, chickpeas, fava beans, eggplant, lentils, mutton, or lamb. Many Syrian recipes date back to the 13th century. Over the years, Syrian cuisine has evolved, and modern dining in Syria includes a selection of appetizers that are called “mezze”.

Mezze is commonly served along with Pita bread and pickled vegetables before the meal’s main course. The mezze includes dishes like Moutabel, Tabbouleh, and Labneh (Strained yogurt mixed with garlic, herbs, spices, and generous dressing of olive oil), and Hummus.

In conclusion, Middle Eastern cuisine is a blend of different cultures, ingredients, spices, and herbs that come together to create appetizing food that can satiate hunger. If you are looking for some authentic and healthy Middle Eastern food, then Toum is a place where you will discover a wholesome eating experience. From Arabic to Turkish and everything in between, we house some of the most authentic Middle Eastern delicacies. Order today to experience a unique burst of flavors that you will surely fall in love with!